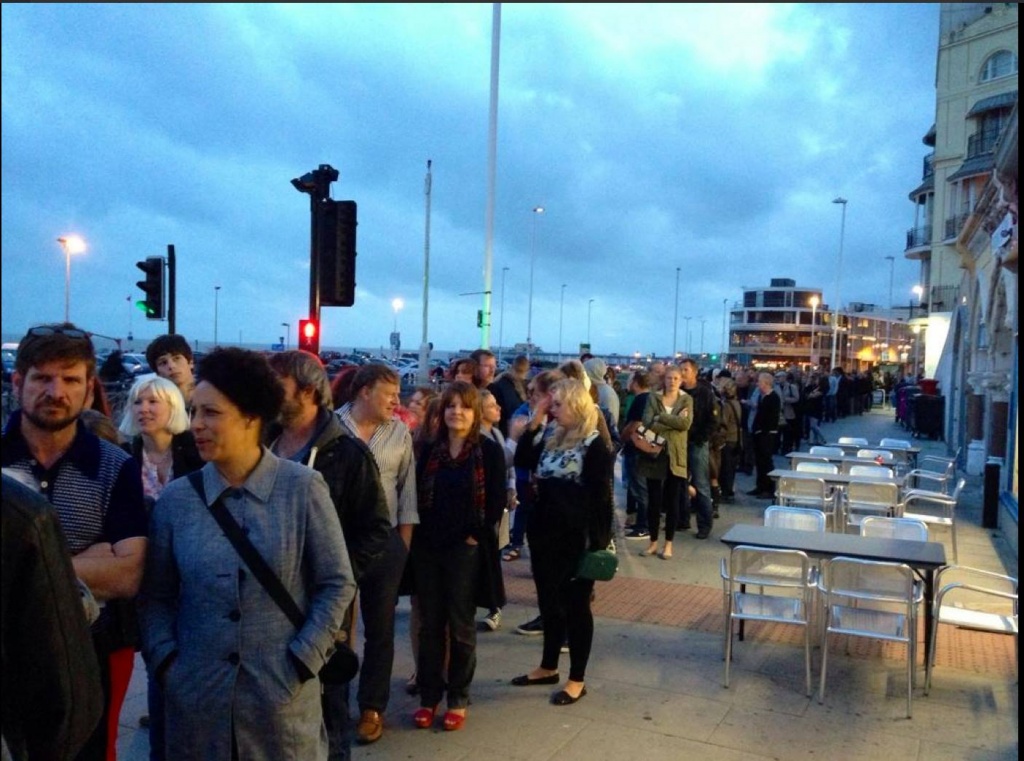 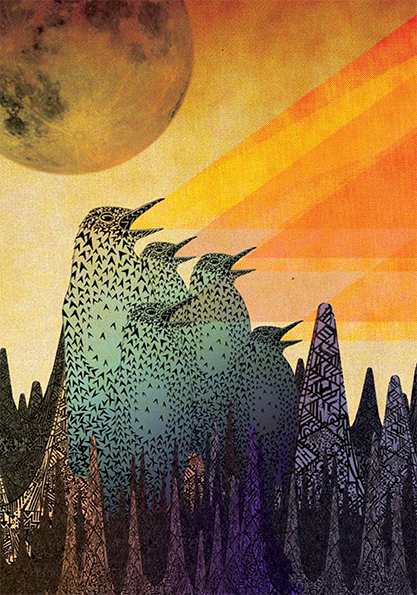 CURATED EVENT:
We were commissioned by Coastal Currents to curate their opening night event in order to celebrate their 15th year. We were given a venue, St.Mary’s in the Castle, a former church on the seafront which opened in 1828, a budget and free reign over the concept. We took two points of reference for inspiration for the Dawn Chorus, the first being the acoustics in the auditorium at St.Mary’s and secondly the work of sculptor Kate MccGwire who had been commissioned to create works for the venue’s crypt to be unveiled during the evening. The idea of a Dawn Chorus seemed a perfect fit considering Kate’s work with feathers, creating abstract forms from a familiar coverage and the fact we were presenting an event for the beginning of the Festival. We decided we wanted a succession of performers to blend into one another, to create the feeling of a continual flow and for there to be a journey narrative on two levels – one of time and the other of place. We also wanted to create an environment for our performers and change the atmosphere of a venue which many locals would find familiar. And so we broke the three hours we were allotted into 3 parts. In the lead up to the event we left a series of 5 clues on the festivals Facebook page as to what would be happening and who would be performing, which appear below.

PART ONE
The End of Day: ‘Home’ 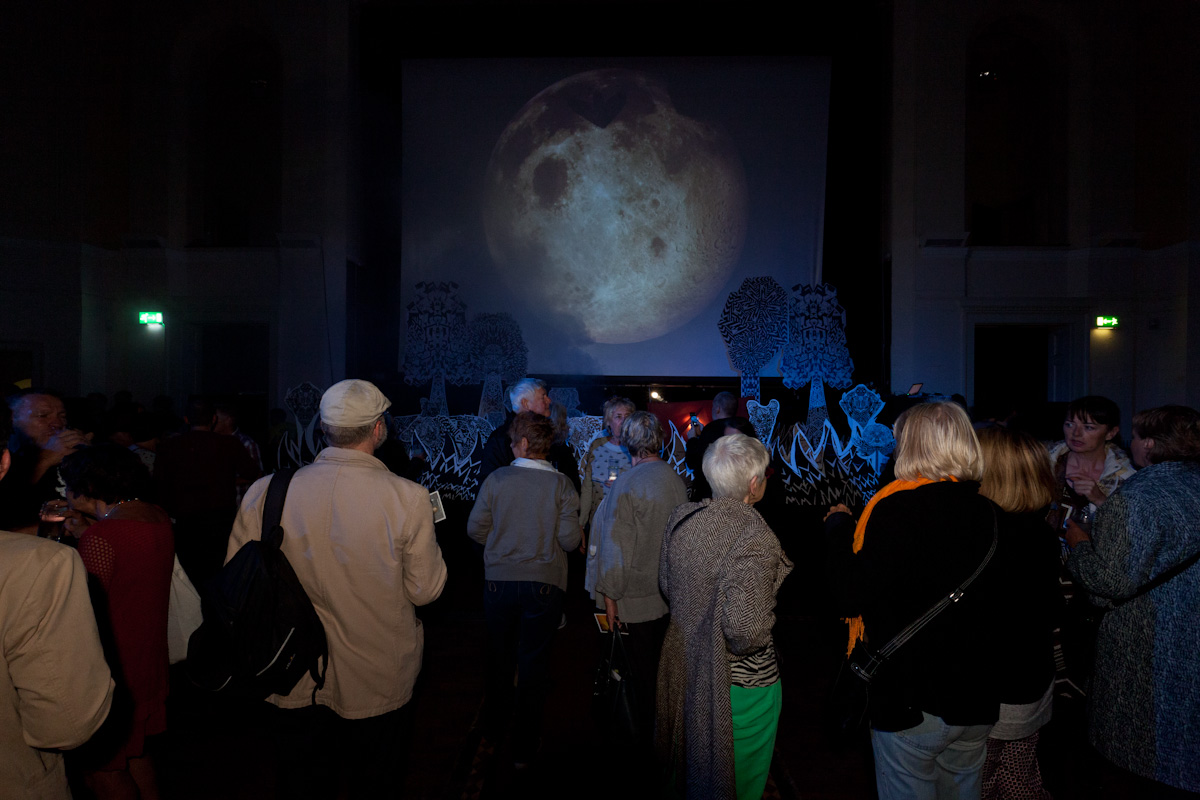 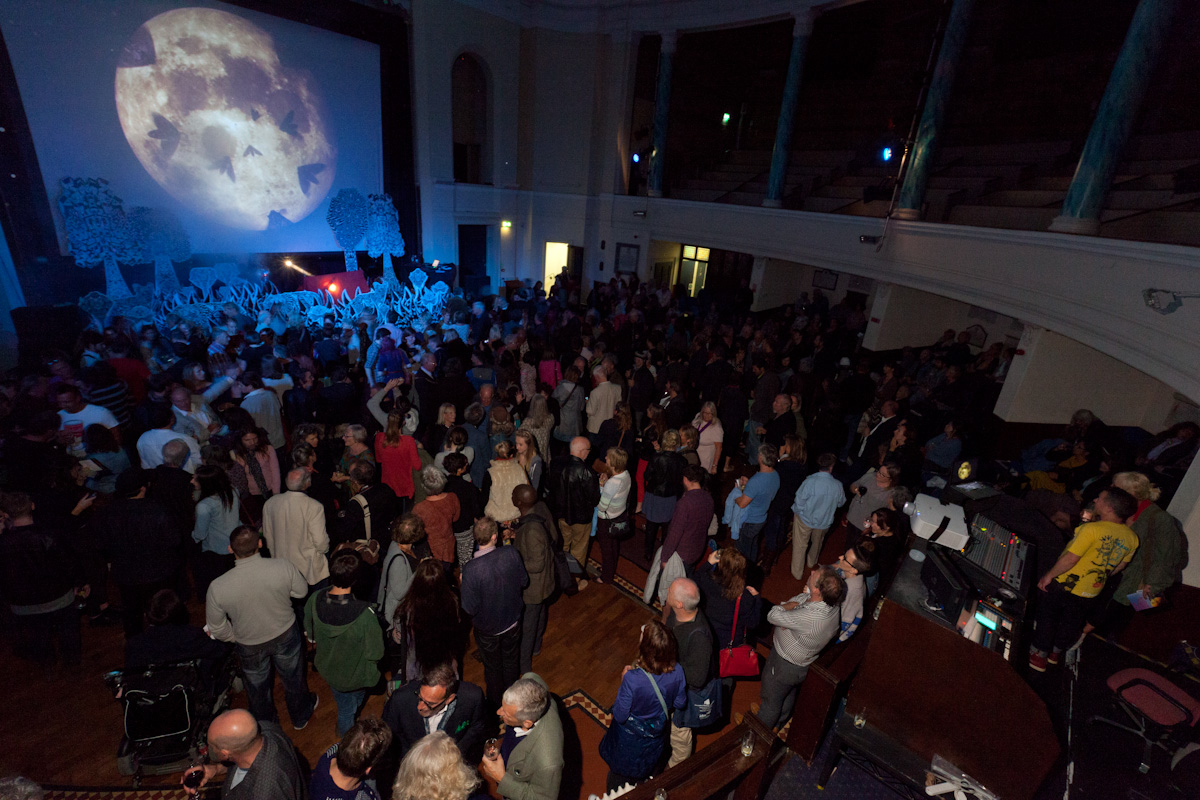 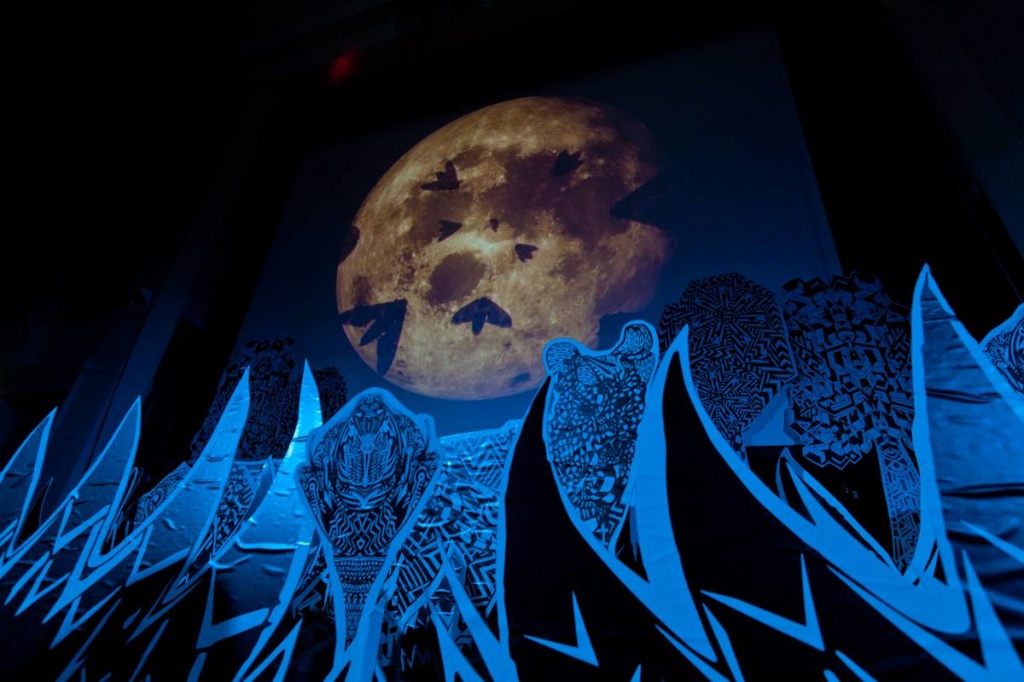 Home’ served to create a subduing effect as people entered the auditorium, the lighting was low and blue in colour with the main light coming from a 3D animation of the moon projected onto the stage, rotating very slowly. As the hour progressed slow motion insects passed by the moon and a thin layer of smoke hazed the space. The audio, we thought, should be calming yet a little disconcerting and so we chose a song from the soundtrack to the film ‘The Shining’, ‘Home’ by Henry Hall and His Gleneagles Hotel Band. We wanted this to be the only music to play during the first hour so we commissioned Tris Taylor aka Benbo, a former Hastings resident, to re-edit the track and slow it down so it could be repeated 4 times but keeping the vocals at near normal pace. At such a pace the song took on a majestic form, the melody coming in waves and the vocal a haunting ghost  amongst the mist. Lyrically the song is about the end a working day:
“When shadows fall, and trees whisper “Day is ending”, my thoughts are ever wending home.”

PART TWO
ACT I
We Travel from Night to Day from City to Woodland: ‘The Sound of Life’ 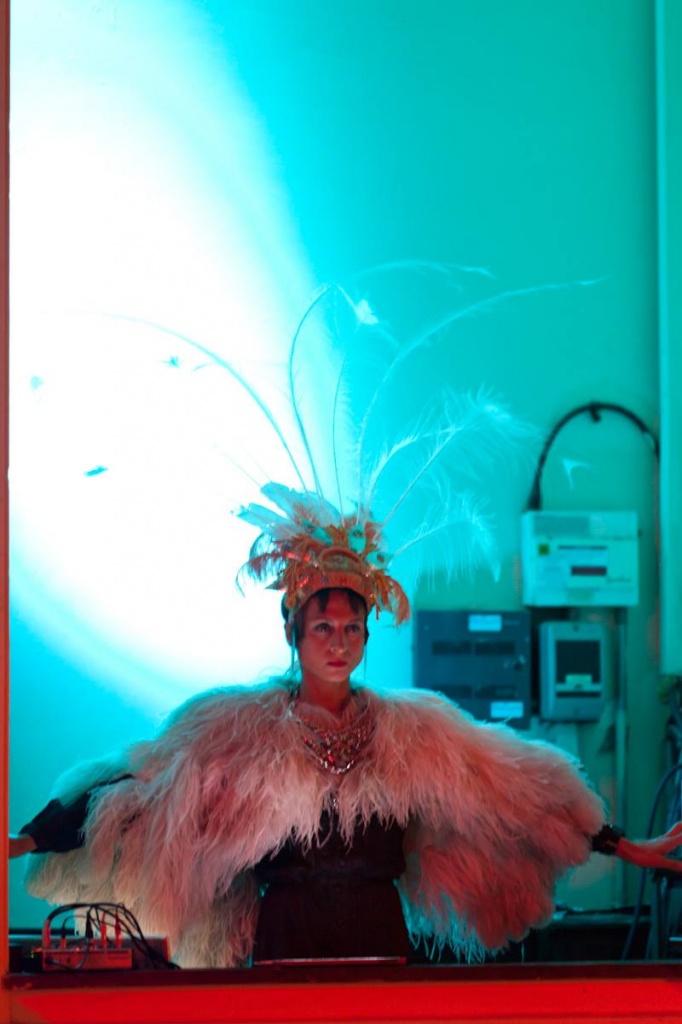 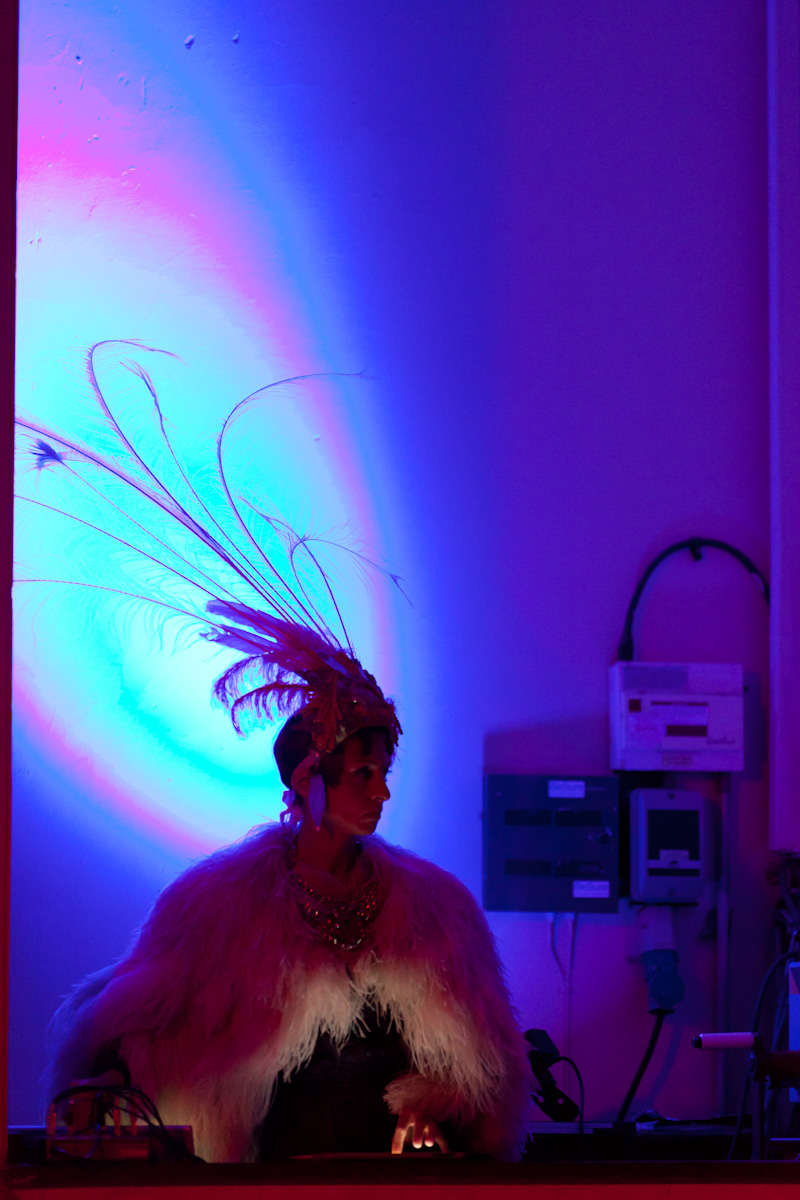 For the first live performance we commissioned sound artist and producer Riz Maslen aka Neotropic. We have been fans of Riz’s music for many years and relished the opportunity to work with her. Riz’s music career started in 1991 providing vocals for Future Sound of London’s rave classic ‘Papua New Guinea’ and she started working under the name Neotropic in 1996 on Ninja Tunes records. We asked Riz to create a transitional soundscape to take us through the night to the dawn starting with the choas of the city traveling to the quiet of a woodland setting. The woodland setting was actualised on the stage, the set featured trees, flowers, bears and foxes. Riz performed above the crowd in a setting to the left of the stage styled by local costume designer/ artist Linda King. 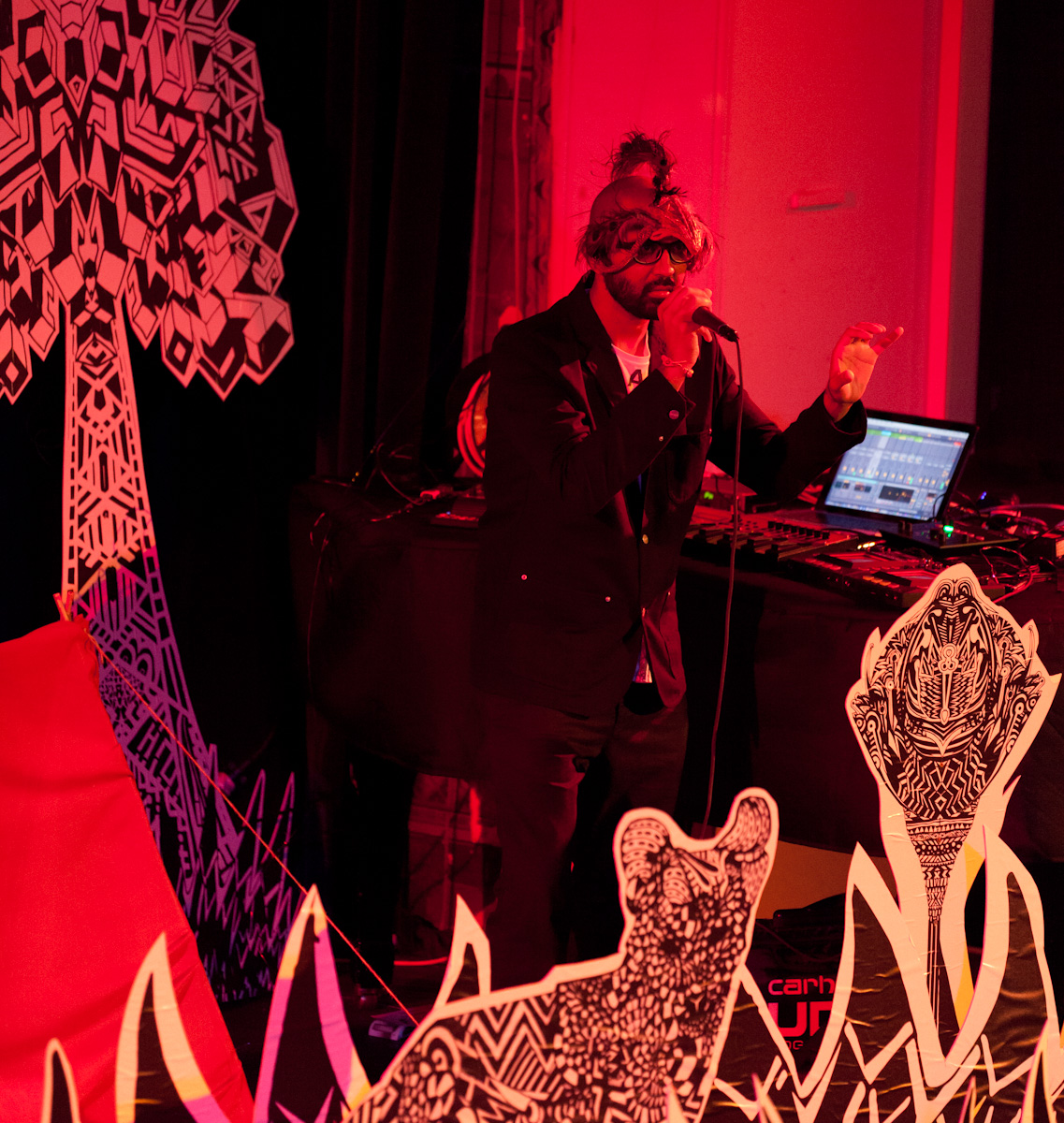 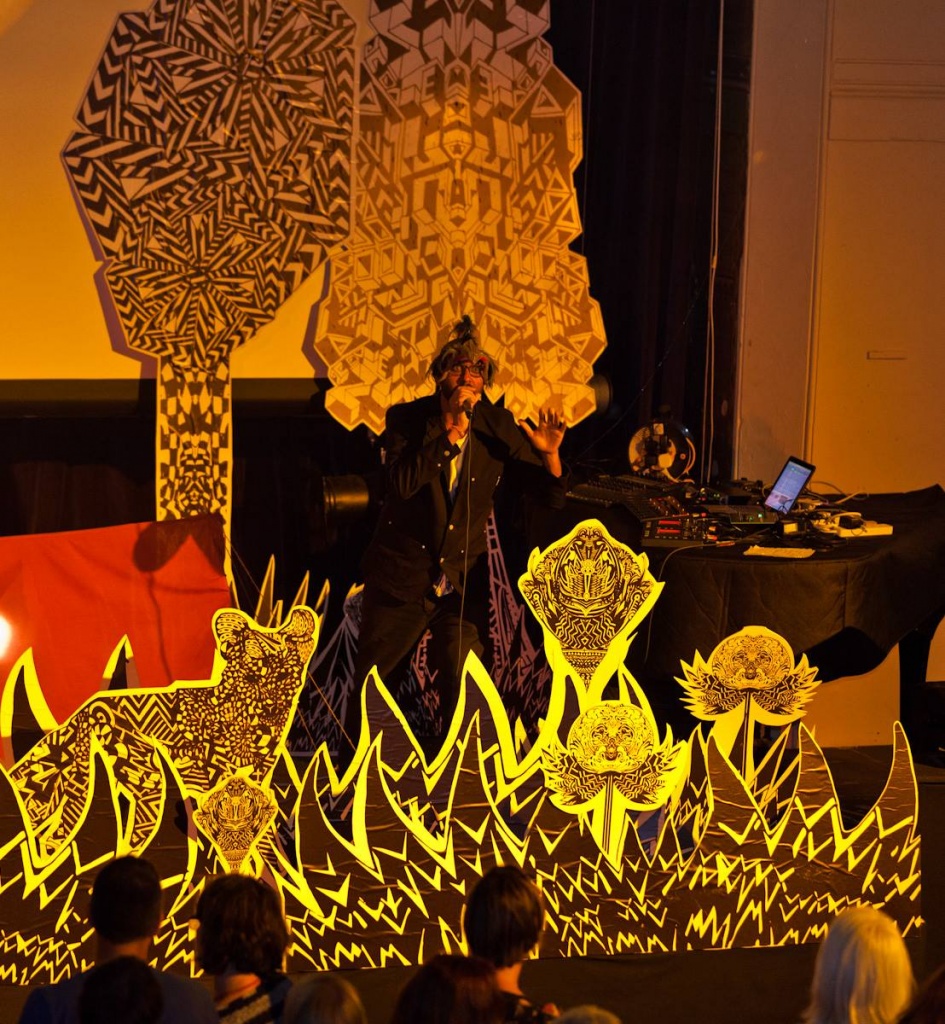 We first saw Jason Singh on the BBC program ‘Country File’ where he perfectly recreated a dawn chorus using his voice and software. Jason is a vocal sculptor and award winning beatboxer who has worked with Nitin Sawhney and the BBC Concert Orchestra, was the first sound artist to have a residency at the V&A and produced an album for the National Trust earlier this year. We asked Jason to perform a 15 min piece that built to a crescendo leading to an improvised call and response sequence with a local choir. Jason’s birdsong crept into Riz’s soundscape as the projection of the moon started to turn into the sun and crowd turned from Riz on high to Jason on stage. 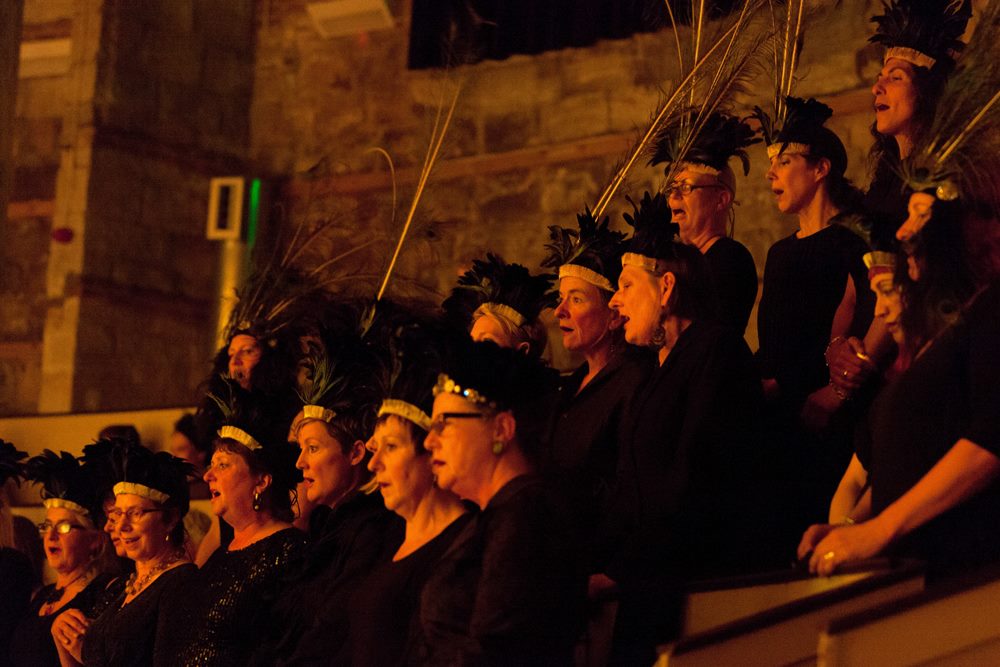 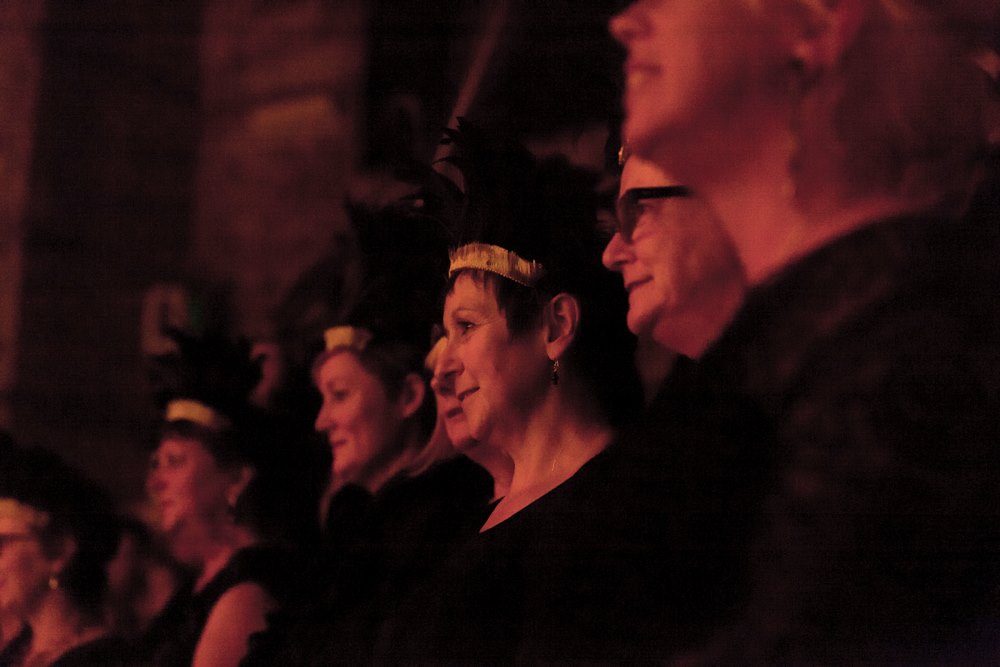 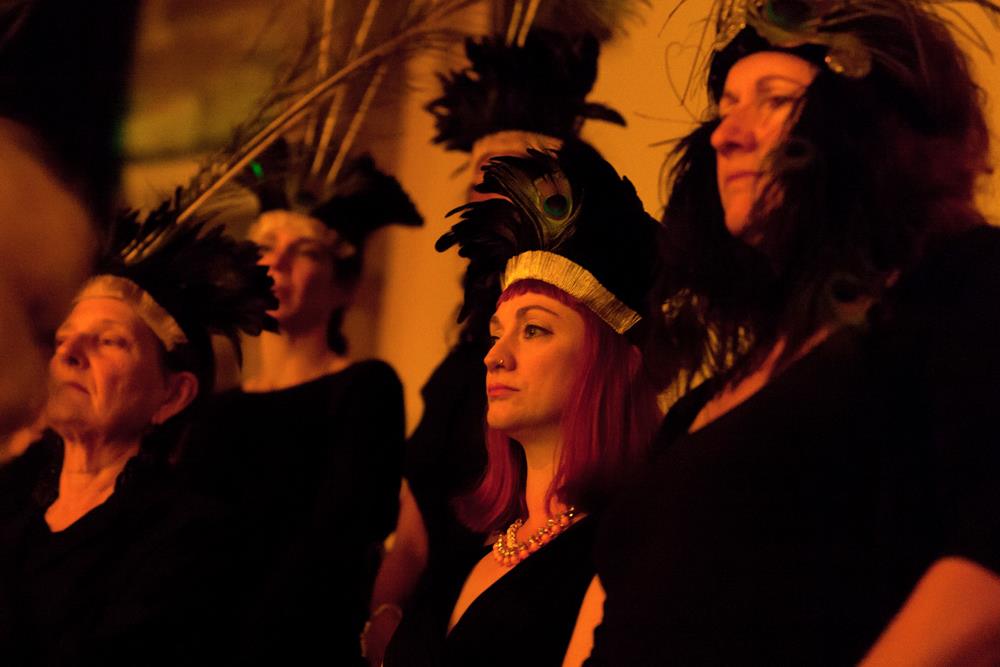 When we found out our given venue was to be St.Mary’s in the Castle we knew we had to fill the space with voices and set about finding a local choir, in amongst the amplified sound we wanted something true and honest. We were advised to approach Claire Hamill who runs several choirs in the town and although it was out of choir ‘term time’ an initial group of 10 women grew to 20 as the rehearsals progressed and word spread. The choir entered the auditorium and took their position in the central stalls above the audience, all with matching headdresses, as Jason’s solo performance peaked. This improvised section of the performance saw Jason making noises and phrases for the choir to mimic as the audiences attention panned from the stage to the stalls, the ladies headdresses rustling and flicking as they responded. 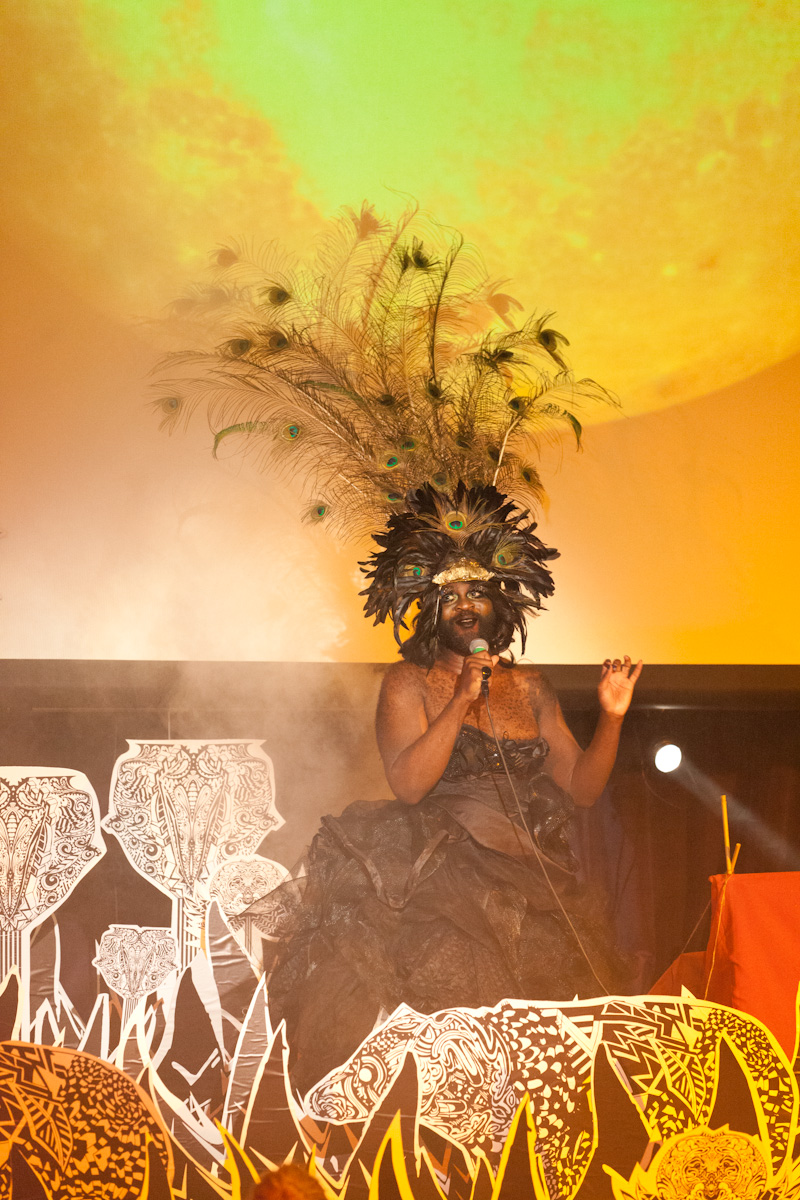 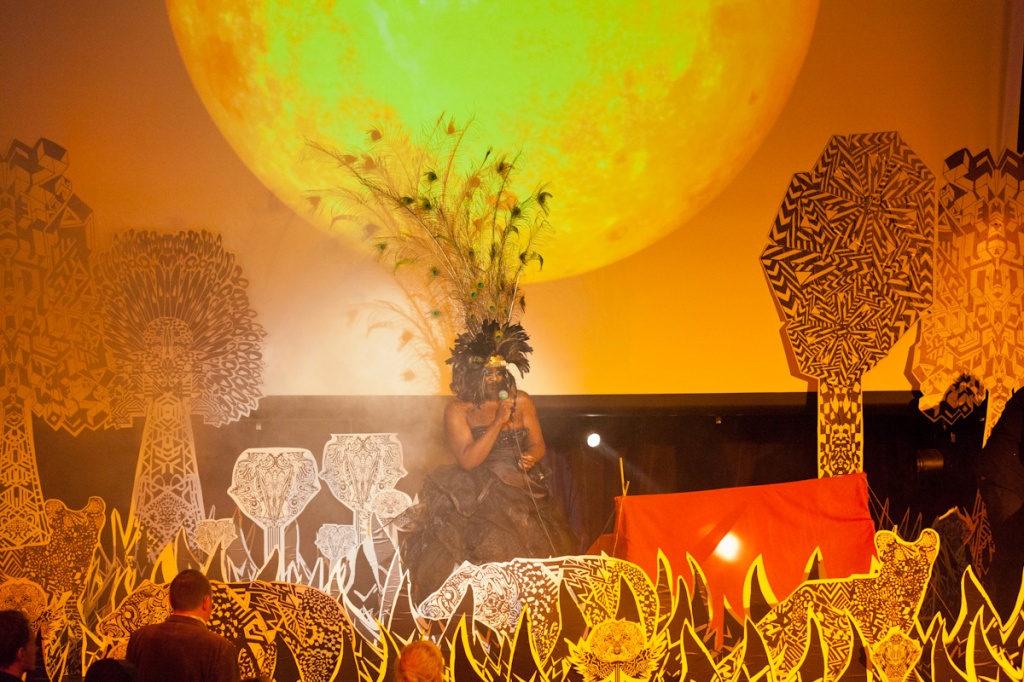 We first worked with Le Gateau Chocolat 10 years ago on a collaboration for textile artist NOKI on a video that was shown at the V&A and at Somerset House as part of an exhibition celebrating the website showStudio.com, he has since performed globally from the Queens flotilla to Sydney Opera House on TV and stage. We wanted Le Gateau’s smooth baritone to contrast with the sweet voices of the choir and asked for a song suggestion, Le Gateau presented a song from Leonard Bernstien’s operetta ‘Candide’, ‘Make Our Garden Grow’ which like ‘Home’ lyrically suited the general tone of the event:

“We’re neither pure, nor wise, nor good, We’ll do the best we know.
We’ll build our house and chop our wood, And make our garden grow.”

The final performance silenced the crowd, the resplendently dressed Le Gateau stepped in to the spotlight as he took to the stage and the choir harmonised as accompaniment. The moon had turned in to the sun and the room was fully lit.

PART THREE
Following speeches from eminent locals and the festival organisers the lighting dropped again and the sun morphed in to a disco ball and for the last 90 minutes we played a set of Disco/ Not Disco tracks which you can hear here.